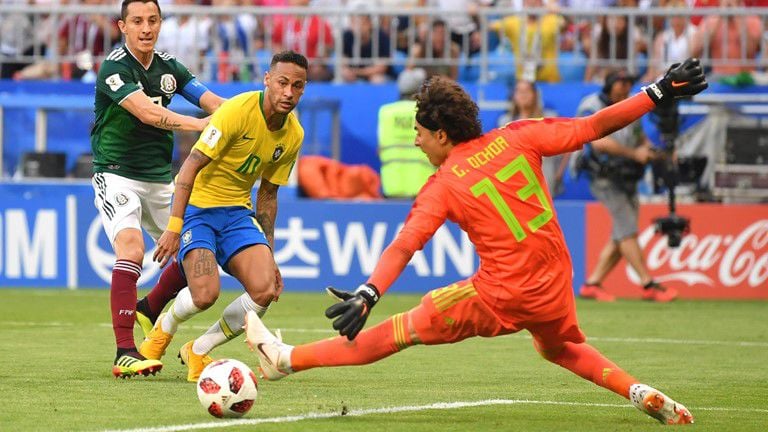 Neymar shoots past Mexico's goalkeeper Guillermo Ochoa during the second half of their Round of 16 World Cup fixture at the Samara Arena, Samara, on Monday. Neymar scored Brazil's opening goal in their 2-0 win. 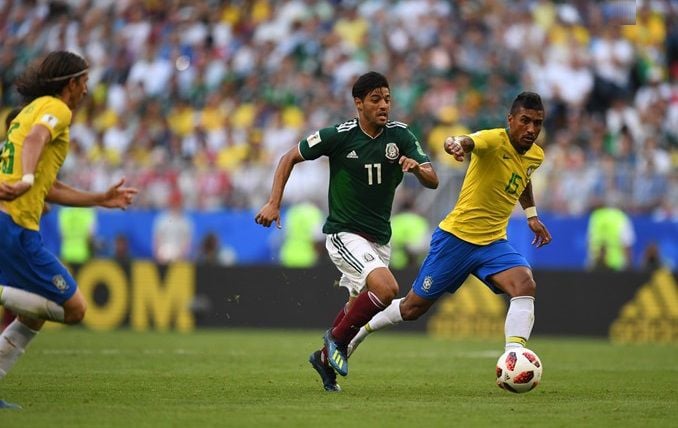 Mexico's striker Carlos Vela takes on Brazil's defence during their Round of 16 clash at the Samara Arena, Samara on Monday. Brazil won the match 2-0.

Neymar shoots past Mexico's goalkeeper Guillermo Ochoa during the second half of their Round of 16 World Cup fixture at the Samara Arena, Samara, on Monday. Neymar scored Brazil's opening goal in their 2-0 win.

Mexico's striker Carlos Vela takes on Brazil's defence during their Round of 16 clash at the Samara Arena, Samara on Monday. Brazil won the match 2-0.

Neymar Jr delivered an inspired performance, scoring one goal and setting up the other, to lead Brasil to a 2-0 win against Mexico in their Round of 16 clash on Monday, which ensured the South Americans advanced to the quarter-finals of the World Cup, for yet another time.

In the 25th minute of the Samara Arena encounter, Neymar bursts into the box after a fine solo run and hit a low shot, only to be denied by Mexico's goalkeeper Guillermo Ochoa, who came up with a fine save.

Eight minutes later, it was Gabriel Jesus who tested the Mexicans with a solo effort of his own, but once again Ochoa was on hand to save the effort and keep the scoresheet blank heading into the break.

Philippe Coutinho came close to putting Brazil ahead three minutes after the interval (48th), sweeping past two defenders on the left of goal to get off a shot. Ochoa however, anticipated the move well enough to come up with a comfortable save.

With Brazil starting to look more threatening, Neymar gave them the go ahead item in the 51st minute with a move he started and finished. He played a back-heel pass to Willian just outside the box, who made a telling run on the left, blowing past two defenders to get into the area and squared the ball across the face of goal. Neymar, who continued his run after the initial pass, would slide in to slot the ball home.

Ochoa, who was having a busy day between the uprights for Mexico, came up big in the 59th to prevent Brazil from extending their lead, keeping out a first-time effort from Paulinho with a brilliant diving save.

However, in the 88th minute his best effort could not keep the Brazilians at bay. Neymar raced into the area from on the left of goal after being sent free by Fernandinho, and his low shot took a deflection of the fingers of Ochoa to land in the path of an onrushing Roberto Firmino, who simply tapped the ball home from close range.

Mexico's loss means they have never beaten Brazil at a World Cup finals, conceding 13 goals without replying in losing four of the fives games contested, with the other being drawn.

Meanwhile, Brazil will await the outcome of the game between Belgium and Japan to know who their quarter-final opponent will be.

Local racehorse owners and trainers, already frustrated by the non-payment of stakes monies …

Bishop: No problem with tour pull-outs