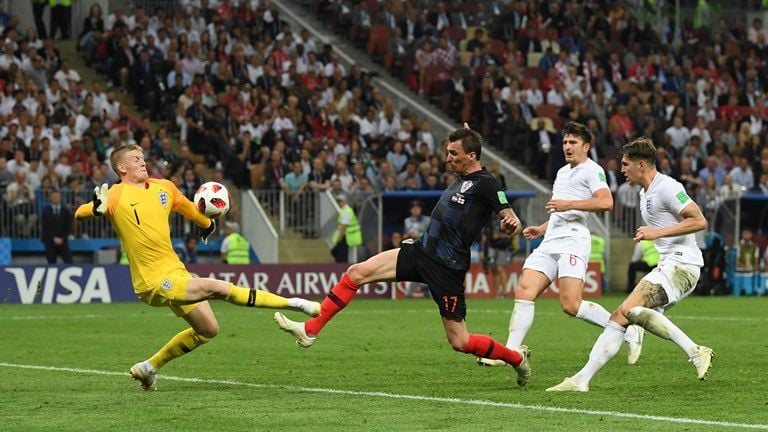 Mario Mandzukic of Croatia rifles a left-footed shot past goalkeeper Jordan Pickford to score the winning item in their 2-1 semifinal win in extra-time over England at the Luzhniki Stadium in Moscow, on Wednesday. 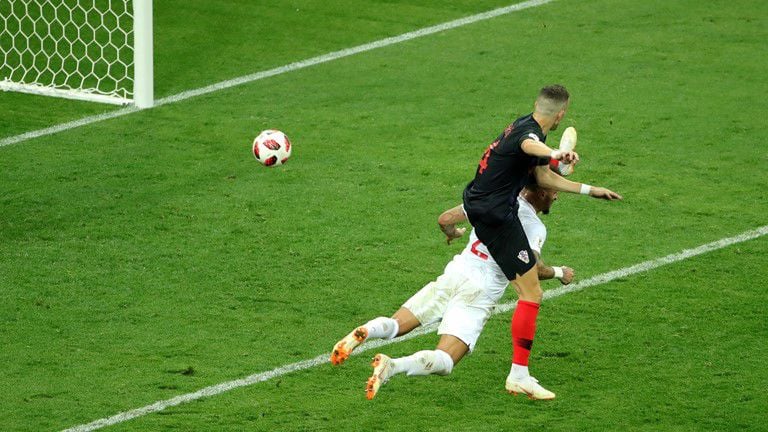 Ivan Perisic of Croatia, right, get a boot to the ball ahead of Kyle Walker's attempted clearance to score his country's first goal in the ir 2-1 victory against England.

Croatia won the hearts of many fans in Russia but also broke the hearts of many English fans when they came from a goal down to beat England 2-1 in extra-time, in their World Cup semi-final clash at the Luzhniki Stadium in Moscow, on Wednesday.

England took the lead in the fifth minute via a well-taken free kick by Kieran Trippier. The defender curled the ball over the wall, to the left of Danijel Subasic, away from his desperate dive and into the top right corner of the net. It was a goal that sparked wild celebrations among the sea of white-cladded English fans.

The game progressed with a series of ebbs and flows as Ante Rebic's shot from on the edge of the box in the 21st minute following a solo run, was blocked by England's defence. Nine minutes later, he was denied by a brilliant save from Jordan Pickford, who did well to keep out a shot headed for the top of the net. At the other end, Jesse Lingard came mere inches of scoring in the 36th, collecting a pass in midfield he unleashing a rasping drive from the edge of the box after a enterprising run goalward, but it was just wide of the upright.

After the resumption, Ivan Rakitic almost pulled Croatia level. He had his effort on goal shut out by the defence after collecting a rebound just outside the box. However, the persistence by the Croats would pay off. In the 68th minute, Sime Vrsaljko played a great cross into the box, and Ivan Perisic came from behind Trippier to get a boot ahead of Kyle Walker's attempted headed clearance to knock home from close range.

Perisic, who plays with Inter Milan, came close to adding another four minutes later, firing in a powerful shot from close range, only for his effort to ricochet off the right post. And Rebic, who picked up the rebound inside the penalty area would only manage to place his effort straight into the arms of Pickford.

Croatia's talismanic marksman Mario Mandzukic finally came to life after having a relatively quiet tournament by his standards. He create some space inside the box after latching on to a pass, but his strike sailed straight to Pickford.

With not other goals forthcoming during regulation time, the game required extra-time to decide which team go on to meet France in Sunday's final.

John Stones steered header off a corner in the 99th was cleared out of the danger zone by Croatia as England went in search of the winning item.

But it would be Mandzukic who would find the back of the net. A ball partially cleared in 109th minute, fell to Perisic, who headed back into the danger zone for the lanky 'Super Mario' to latch on to and rifle a left-footed shot that flew low across Pickford to settle into the right bottom corner of the net. And with 11 minutes left on the clock England's hope of their first World Cup final since 1966, quickly dwindled as Croatia remained resolute in defence.