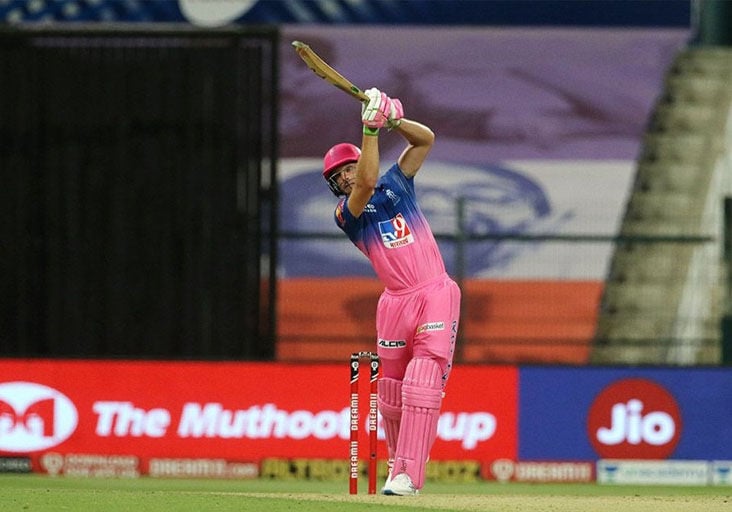 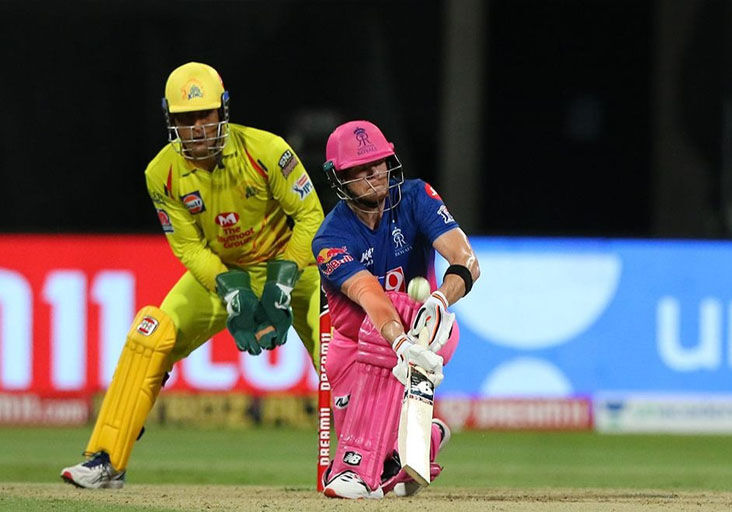 SUPPORT ROLE: Steve Smith, captain of Rajasthan Royals, paddles the ball as wicketkeeper MS Dhoni looks on, during yesterday’s match against Chennai Super Kings, at the Sheikh Zayed Stadium. Smith made an unbeaten 26 to help see his team home to victory.

SUPPORT ROLE: Steve Smith, captain of Rajasthan Royals, paddles the ball as wicketkeeper MS Dhoni looks on, during yesterday’s match against Chennai Super Kings, at the Sheikh Zayed Stadium. Smith made an unbeaten 26 to help see his team home to victory.

Buttler’s second 50 of the campaign lifted the Royals from 28-3 after five overs to their small target of 126 with 15 balls to spare as he shared an unbroken stand of 98 with skipper Steve Smith (26no).

The 29-year-old reached his half-century from 37 balls amid a run of three consecutive fours before going on to match the 70 he had hit against Mumbai Indians earlier this month on the same ground.

Three early wickets, including that of Ben Stokes (19 off 11), gave Chennai hope but Buttler and Smith squashed that as Royals moved from bottom to fifth and just two points behind Kolkata Knight Riders.

Chennai have replaced Rajasthan at the foot of the table and remain four points adrift of the top four with only four of their 14 group games left.

Super Kings skipper MS Dhoni hit 28 on the day he became the first player to make 200 IPL appearances, sharing a stand of 51 with Ravindra Jadeja (35no) for the fifth wicket.

But Chennai were unable to accelerate, with Gopal and Tewatia limiting them to just 30 runs and no boundaries between overs six and 13 after they had been 45-2 after an eventful first five overs.

The CSK innings began with a bang as Archer bowled a series of jaffas to Sam Curran (22) and then earned a deserved wicket in his second over, the game’s third, when Faf du Plessis (10) spooned him to Buttler at cover.

Shane Watson (8 off 3) went four, four, out in the fourth over, while Stokes was smashed for a six by England team-mate Curran and two fours by Ambati Rayudu in the fifth.

Gopal and Tewatia then took over, sinking Chennai to 56-4 after 10 overs with Gopal having Curran caught at long-off by Buttler and Tewatia forcing Rayudu—who had successfully overturned an lbw dismissal against Gopal on 12—to top edge behind on 13.

CSK snapped the boundary-less run with three in Kartik Tyagi’s 14th over and added three more fours before the innings ended but 51 dot balls across the innings highlighted their problem.

Archer slightly tarnished his day with some late errors at long-off, letting the ball slip through his fingers to hand Dhoni a boundary and then dropping Kedar Jadhav off a frustrated Stokes.

But his third mistake in the deep actually brought about a wicket—Dhoni and Jadeja attempted a second run after Archer’s misfield and Dhoni was run out just short of his ground after Archer finally gathered the ball and arrowed in the throw to Royals wicketkeeper Sanju Samson.

Dhoni’s smart catch low down the leg-side in the fifth over of the chase then saw Samson out for a three-ball duck to Deepak Chahar (2-18) as Royals tumbled from 26-0 to 28-3 following Stokes’ exit.

Stokes had crunched Chahar’s previous ball for four but then chopped on, with Robin Uthapppa (4) soon caught behind by Dhoni off Josh Hazlewood.

Australia seamer Hazlewood—into the Chennai side as a replacement for groin-injury victim Dwayne Bravo—then thought he had countryman Smith lbw for nought, only for the not-out decision to be upheld with Chennai’s review showing a faint inside-edge before the ball hit the pad.

Smith went on to notch the winning run but very much played second fiddle to Buttler, who struck seven fours and two of the game’s three sixes.

Nabeel is ‘East’ king once again

NABEEL MOHAMMED was crowned men’s A Division singles champion for the second year in succession when the curtain fell on the East Clubs Classified Tennis Tournament, yesterday, at Trinidad Country Club, Maraval.

The 22-year-old won the battle of the country’s top-two ranked players 6-3, 7-6 (8/6) over Akiel Duke for the spotlight title in the two-weekend tournament.

DARREN SAMLAL struck 75 not out to lead the South/South East squad to a comfortable 21-run win over North/Tobago in the opening game of the Trinidad and Tobago Cricket Board (TTCB) Under-19 Trial series, which commenced yesterday at the National Cricket Centre (NCC) in Balmain, Couva.

THE Trinidad and Tobago Cycling Federation’s (TTCF) two assessment events, to select national teams for upcoming competitions, has been postponed.

Originally scheduled to start on two consecutive Fridays (April 9 & 16), the event will now launch from April 16 with the second one pedalling off the following Friday (April 23) from 7 p.m. on both days at the same venue, the National Cycling Centre in Couva.

Tyra Gittens notched the best score of her career for a runaway victory in the women’s heptathlon at the Texas A&M Team Invitational, in the United States, on Saturday.