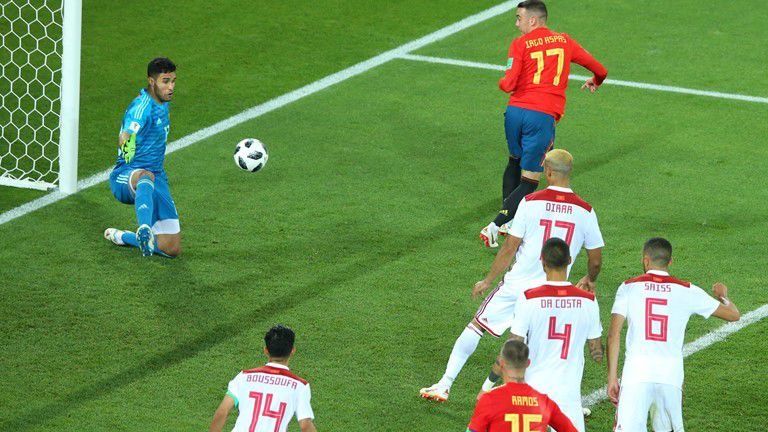 Iago Aspas back-heels the ball past Morocco's goalkeeper Monir El Kajoiu to seal a 2-2 draw in their final Group B match at the 2018 FIFA World Cup in Russia, On Monday. 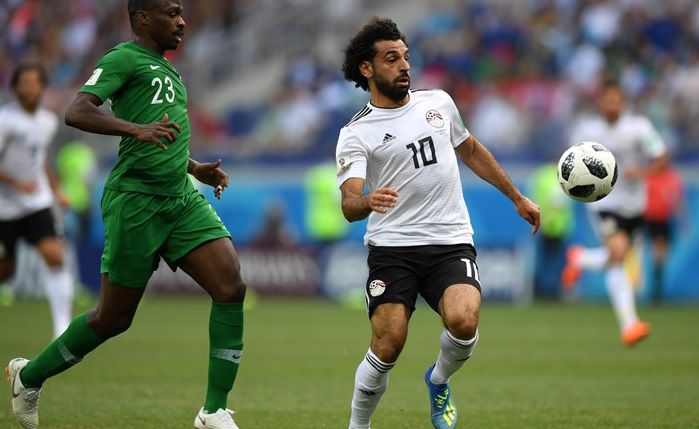 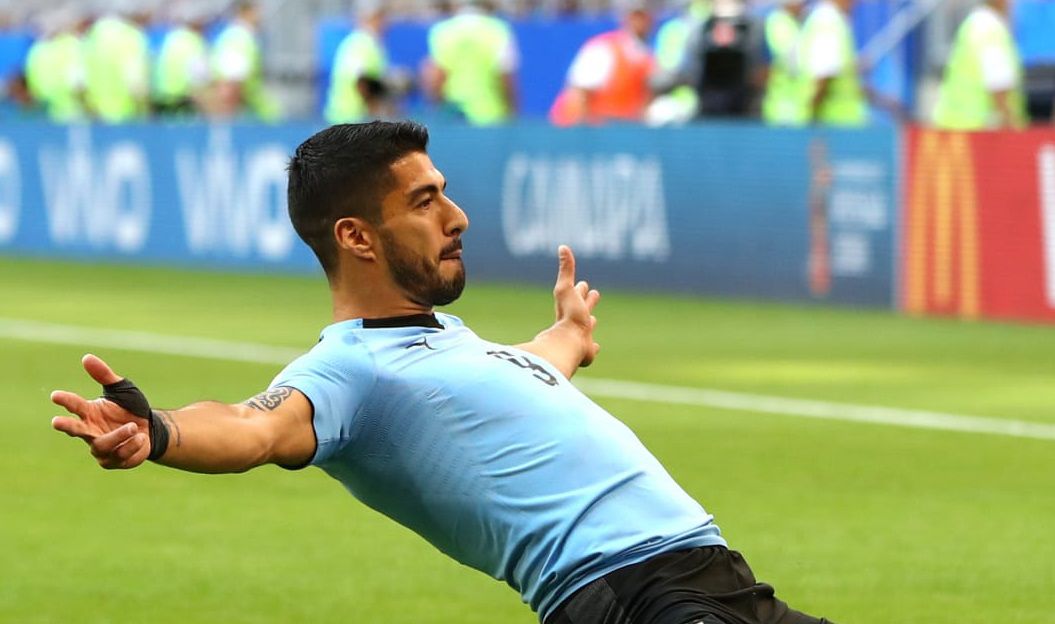 Uruguay's Luis Suarez celebrates scoring his team's opening goal in their Group A matchup against Russia in Samara, Russia, on Monday.

Spain and Portugal both registered draws in their final Group B encounter at the 2018 Fifa World Cup in Russia on Monday, however, they both advanced to the Round of 16.

The Spaniards had to come from behind twice to grab a 2-2 stalemate against Morocco, while a gutsy Iran outfit clawed their way back to earn a 1-1 draw with Portugal.

Khalid Boutaib gave the Moroccans the lead in the 14th minute when he dispossessed Andres Iniesta at the halfline and and raced into the area to beat David de Gea to his right. Iniesta made speedy amends for his earlier mistake, driving past three defenders on the left of goal to cut the ball back for an unmarked Isco to slam home. That goal came in the 19th minute.

Following the break, Morocco continued to press and were rewarded when Youssef En Nesyri rose above Spain's defence in the 81st minute to placed a powerful header, off a right side corner, past a hapless De Gea. But Iago Aspas would produce a cheeky goal in the 91st minute to spare the Spaniards blushes. He allowed a cross for Dani Carvajal to float across him before diverting the ball past Monir El Kajoiu with the heel of his right boot.

In the other match, Ricardo Quaresma gave Portugal the lead on the stroke of halftime but was denied the win when Karim Ansarifard converted a penalty in the third minute of time added on.

Spain and Portugal finished on five points and a goal difference of plus one apiece, but the Spaniards earned top spot from having scored six goals compared to the five produced by the Portuguese.

Meanwhile, two early first half goals and a strike by Edinson Cavani in the final minute of regulation, paced Uruguay to a 3-0 win against host Russia in their top of the table Group A clash at the Samara Arena, Samara, Russia, on Monday.

Luis Suarez gave the South Americans the start they needed when he drove a free kick in the 10th minute, low beyond the wall and past the left hand of Igor Akinfeev. Uruguay's second item was a bit fortuitous, as a shot from long range by Diego Laxalt took a healthy deflection off Denis Cheryshev and wrong-footed Akinfeev as it flew beyond his reach. The 23rd minute item was credited as an own goal.

Russia's attempt at pulling off a victory received a further blow when defender Igor Smolnikov, who plays with Zenith St Petersburg, was given his marching orders after picking up his second yellow card in the 36th minute for a crushing tackle on Laxalt.

Down a man and by two goals, Russia, despite some sporadic plays, never got into the game and would concede a third in the dying stage. Diego Godin's powerful header off a 90th minute corner, was well saved by Akinfeev, but Cavani was quickest to react to the to the rebound, slapping home from close range.

Despite the loss, Russia finished second in the group with six points and advanced to the round of 16 along with Uruguay, who top the group with a perfect three from three and nine points. Suarez picked up the Budweiser 'Man-of-the-Match' award.

In the final Group A contest, Saudi Arabia exited the tournament on a winning note with a last-grasp 2-1 victory against Egypt.

Mo Salah put Egypt ahead in the 22nd minute when he skilfully took down a a pass lofted from the deep, between two defenders before nonchalantly chipping the ball over the advancing Yasser Al Mosailem in goal. Saudi Arabia had an opportunity to draw level just in the 41st minute when a shot by Yasser Alshahrani struck the hand of defender Ahmed Fathi and referee Wilmer Roldan of Colombia, awarded a penalty. However, Fahad Al Muwallad had his spot kick brilliantly saved by Essam El Hadary, who went to his right and punched the ball onto the crossbar and back into play.

The Saudis did get the equaliser before the break. Ali Gabr dragged Al Muwallad to the ground in time added on at the half, stopping the striker from latching on a to a defence-splitting pass from Salman Al Faraj, with just Al Mosailem in goal to beat. Roldan had no hesitation in awarding a penalty, and Salman would send Al Mosailem the wrong way before placing the ball to his right. And just when it seemed that the game would end in a stalemate, Salem Al Dawsari beat Al Mosailem at his near post, after being played in by Abdullah Otayf in the fifth minute of time added on.

Though entering the match having already been eliminated by virtue of losing their two prior matches, the Saudis left the 2018 FIFA World Cup with the pleasant memory of a victory under their belts.

Spain will face Russia in the Round of 16 while Uruguay will have Portugal as their opponents for a place in the quarterfinals.