You are the owner of this article.
Edit Article Add New Article
You have permission to edit this article.
Edit
Subscribe to E-paper
Election Central 2020
Coronavirus
Opinion
Press Releases
Special Report
Express TV
On Point
Individual of the Year
Someone Knows Something (SKS)
Photo Gallery
Videos
Special
Share This
1 of 5 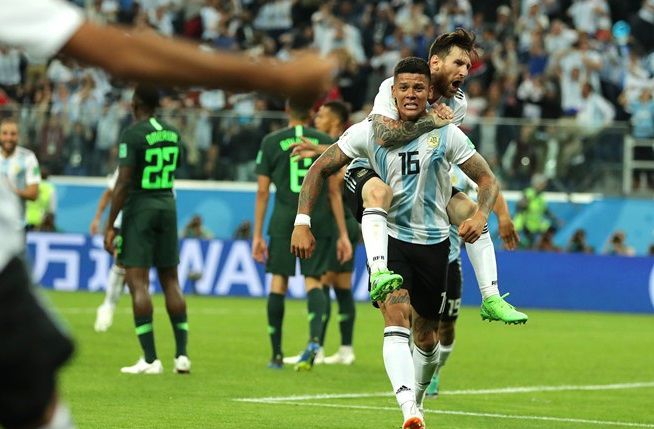 A jubilant Lionel Messi rides the back of Marcos Rojo after the defender scored Argentina's winning item in the 86th minute to book their spot in the knockout phase of the 2018 FIFA World Cup. 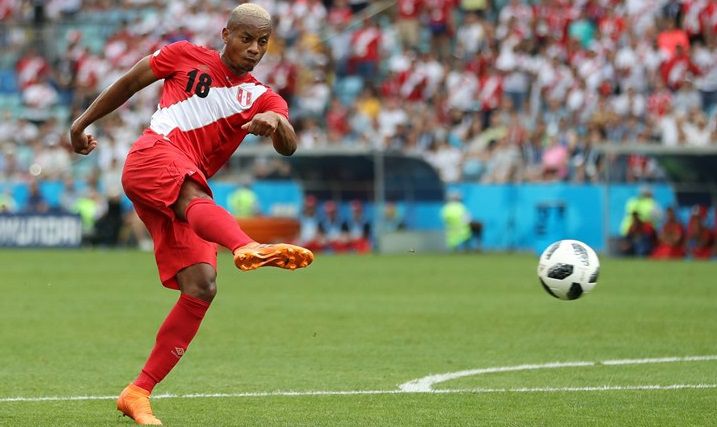 Andre Carrillo of Peru cracks a volley in the 18th minute of their Group C matchup against Australia, which produced the opening goal of the contest. 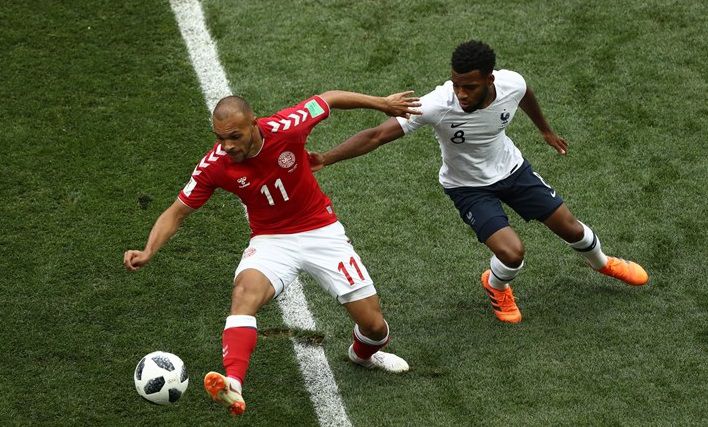 Denmark's Martin Braithwaite, left, tries to get away from the close attention of Thomas Lemar of France, during their Group C clash at the 2018 FIFA World Cup at the Luzhniki Stadium in Moscow, Russia, on Tuesday. 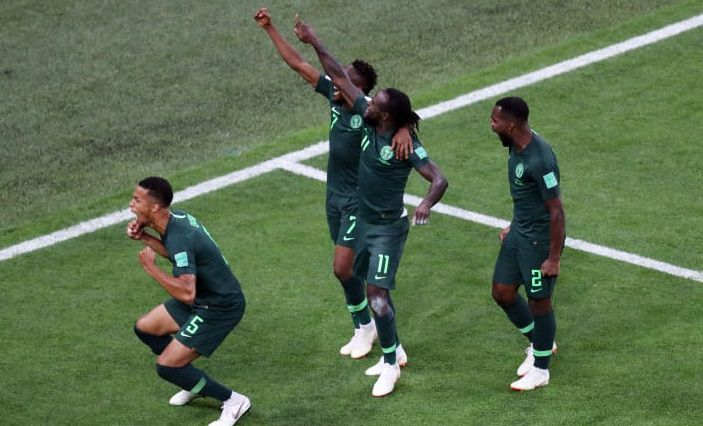 Some members of Nigeria's Super eagles celebrate after Victor Mosses converted a 51st minute penalty to draw them level with Argentina in their World Cup Group D fixture in St Petersburg, Russia, on Tuesday. 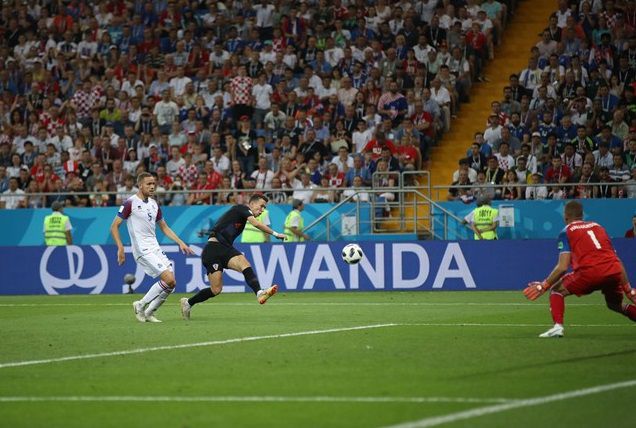 Ivan Perisic breaks free along the left side of the area and beats goalkeeper Hannes Halldorsson with a firm finish to restore Croatia's advantage in the last minute.

A jubilant Lionel Messi rides the back of Marcos Rojo after the defender scored Argentina's winning item in the 86th minute to book their spot in the knockout phase of the 2018 FIFA World Cup.

Andre Carrillo of Peru cracks a volley in the 18th minute of their Group C matchup against Australia, which produced the opening goal of the contest.

Argentina advanced to the knockout round of the 2018 FIFA World Cup thanks to Marcos Rojo's stunning 86th minute strike that gave them a hard-fought 2-1 win against Nigeria in their final Group D match at the St Petersburg Stadium, Russia, on Tuesday.

The South Americans took the lead in the 14th minute when Lionel Messi took down an Ever Banega cross on his left thigh, push the ball ahead of him and struck a cracking right-footed shot past Francis Uzoho. He almost notch a second item in the 33rd off a free kick, but his effort smacked the right post.

Nigeria levelled proceeding in the 51st minute when referee Cuneyt Cakir awarded a questionable penalty after he adjudged Javier Mascherano to have hauled down Leon Balogun in the box. Victor Moses stepped up and made no mistake with his spot kick, waiting for Franco Armani to move before side-footing the ball ball low to his left.

More controversy ensued following Cakir earlier penalty call, this time deciding that Rojo did not deliberately handled the ball in the 76th minute after consulting the VAR, ruling that the ball went from head to hand and waving off Nigeria's call for a penalty

That decision would come back to haunt the Super Eagles, as it was Rojo who would put the nail in Nigeria's coffin, firing a one-time shot past the diving Uzoho after Gabriel Mercado had made an uncontested run down the right to whip a cross into the box. The goal knocked the stuffing out of Nigeria and its player were reduced to tears at the final whistle.

The win took Argentina to four points and second place in the group while Nigeria had to settle for third position on three points.

In the other Group D contest, Croatia ended their group campaign with a perfect three of three record via a 2-1 triumph over Iceland.

Milan Badelj put them ahead, firing home past Hannes Halldorsson in the 53rd minute. Iceland, however came right back with Sverrir Ingi Ingason crashing a header off the crossbar in the 56th minute. Their persistence paid dividends 20 minute on when Dejan Lovren handled the ball in the box, giving away a penalty. Gylfi Sigurdsson was composed in placing the ensuing spot kick beyond the reach of Lovre Kalinic to draw his team level.

But the Croats were not finished. And in the final minute of regulation, Ivan Perisic beat Halldorsson in a one-on-one after picking up a pass just at the edge of the box, to seal the win.

Croatia top the group with nine points and will now Group C runner-up Denmark in the Round of 16, which begins on Saturday. Meanwhile, for finishing second, Argentina earned what is a star-studded meeting with France, who topped Group C.

Peru defeated Australia 2-0 in their final Group C fixture at the 2018 FIFA World Cup on Tuesday.

The match at the Fisht Stadium in Sochi, Russia, got off to a bright start, with the Peruvians using their quickness to get in behind their opponents' defence on a couple of occasions.  And Carrillo, who plays professionally with Watford FC in the English Premier League, made them pay in the 18th minute when he ran on to a lofted cross from Paolo Guerrero on the left of goal, to hit a sweetly-timed volley past Matthew Ryan, that settled at the bottom left corner of the net.

Carillo's item was the first World Cup goal scored by Peru in 36 years and it came despite them enjoying just 45 percent possession in the first half.

Five minutes after the resumption, Guerrero scored Peru's second. Edison Flores made a brilliant run on the left, weaving his way between three defenders to flick the ball on to Guerrero, who with a defender on his back, hit an angled left-footed shot that beat Ryan to his left.

Australia made two quick changes after conceding the second goal, with legendary striker Tim Cahill appearing in his fourth World Cup, replacing Tomi Juric in the 53rd, and 19-year-old Daniel Arzani coming on for Robbie Kruse in the 58th, to partner with Cahill upfront.

However, the Peruvians were solid in defence, especially in the final 10 minutes of the match, holding off the desperate Aussies and sending them out of the tournament with a defeat in what was Cahill's final appearance on a World Cup stage.

The other Group C match, featuring France and Denmark, ended in the first goalless game of the World Cup. France had already booked their place in the Round of 16 while Denmark need to avoid defeat to advance, and with that in the minds of both teams, they approached the game with a great degree of caution.

Olivier Giroud came close to putting France ahead in the 15th minute, but his rasping strike from the edge of the box, which was heading into the top left corner, was well punched behind for a corner by goalkeeper by Kasper Schmeichel.

France had another great chance of breaking the deadlock when Ousmane Dembele beat a defender in the 41st minute, but his shot from the edge of the penalty area flashed just wide of the left post.

‘And the winner is…’

“You can’t shake hands with a clenched fist” —Indira Gandhi.

Pollard on losing side

Having seen his Caribbean Premier League team play unbeaten for 12 matches, there was finall…

So far, so good

FIFA general secretary Fatma Samoura spoke directly of suspension of the Trinidad and Tobago Football Association (TTFA) for the first time yesterday when giving this country’s FA a September 23 (next Wednesday) extension for its former executives to withdraw its High Court action against world football’s governing body.